In 2004, The Science and Innovation Investment Framework (SIIF) set out the ambition to increase R&D to 2.5% of GDP by 2014, this was not accomplished. 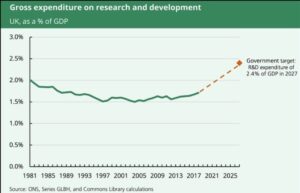 The most recent full data set that is available is from 2018. 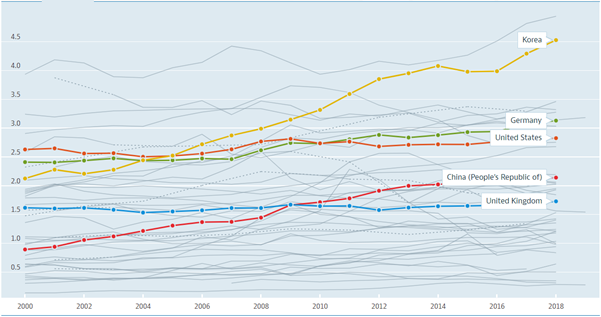 To reach target, the share as a percentage of GDP will have to increase by 40%, which in nominal terms, will be a huge sum.

Gross Domestic Product estimations from the OECD project UK GDP to reach £3.04 trillion by 2027. Meaning the 2.4% target will calculate at circa. £73 billion by 2027, though this could vary widely.

This equates to a compounded annual growth rate (CAGR) of 8% per year from it’s current levels through to 2027.

The UK measures both R&D funded and R&D performed in the following sectors:

These sectors’ R&D data are known collectively as gross domestic expenditure on R&D (GERD). The GERD is the £37.1 billion that is reported as the headline figure.

Data Source: ONS (Rounding means figures do not add to 100%)

Note: R&D performance is regarded as a more accurate measure than R&D funding received by an organisation, as not all funds received may be used on R&D as intended. However, from the perspective of trying to hit the 2.4% target, funding is the catalyst.

At £7.1 billion, the government and UK Research and Innovation (UKRI) sector was the second largest source of UK R&D funding in 2018 (19% of total funding), increasing by 5.1% compared with 2017. Although, Higher Education R&D can be considered Government Funding, which adds another £2.5 billion to the total.

Looking at other countries for comparison, it appears the UK will need to accelerate private business R&D funding if we are to get to the higher levels spending that are desired. For comparison, the private business sector investment in high performing Germany, Israel and South Korea falls roughly between 66-80% of gross domestic expenditure on R&D (GERD).

In fact, in countries investing more than the OECD average, the private sector spends more than £3 for every £1 spent by the public sector.

Some ideas to foster more private funding include:

o Increasing investment in experimental and commercial R&D. These offer the largest private-to-public funding ratios in all countries.

o Collaboration with the pharmaceutical industry is key as the industry spends more than half of its annual budget on experimental development and is the largest contributor.

o Increasing the entrepreneurial role of the academic sector by incentivising academics to commercialise research results and providing access to public funding and venture capital for early-stage projects.

o Commitment to the UK’s intellectual property system to foster and reward innovation.

South Korea has shown it is possible, it has achieved a step change in its R&D performance, raising investment from 2.2% to 4.5% of GDP between 2000 and 2017. Their focus is on close collaboration between government, industry, and the academic community. In the same time frame, their GDP has grown from $576.2 billion to $1.65 trillion. The clear majority of R&D spending (circa. 75%) comes from private business in South Korea, with the likes of LG and Samsung making considerable contributions.

If this increase is reciprocated by the business enterprise sector, then the UK could be dining at the top table.

The focus throughout this process should remain: does the investment lead to innovation and does the innovation lead to well-being?

If these are ideas that you want to explore further but you’re not sure where to start, then get in touch